To share your memory on the wall of Mother Frances Roman, sign in using one of the following options:

A receipt has been emailed to the address provided. A receipt may also be printed.

Frances moved to Rochester, New York at the age of 37. She was married twice, first to Burton
Bellamy and then to William Roman, both deceased. Although she never had any children of her
own, Frances was considered a second Mom to her nieces, Ociemae Neeley (Monticello, Florida)
and Pamela Williams (Rochester, New York). Frances shared her love with her many, many nieces
and nephews, and with everyone who came into her life. She was known for always being available
whenever a family member or a friend was in need.
She accepted the Lord at an early age. She was a long-time (for over 60 years) member of Antioch
Missionary Baptist Church of Rochester, New York, where she served on the Missionary Board and
the Mothers Board. She served her church and community with faith and dedication. She also
worked for many years at the former Manhattan Restaurant in Rochester, New York, from where
she eventually retired.

Frances’ family and friends could add many stories about her kindness and wisdom by sharing their
recollections of her life and those of her ancestors. In 2018, The Honorable Mayor Lovely A. Warren
and the City of Rochester, along with Frances’ family, proclaimed August 10, 2018 (her 100th
birthday) “Frances Roman Day.” What an honor for her to receive this recognition!

Mother Roman made her transition from earth to glorious rest on May 21, 2021. She is predeceased
by: her parents, Ed and Selena Williams; spouses, Burton Bellamy and William Roman; eight
siblings: James, David, Estella, George, Janie, Dan, Herbert, and Louis. She leaves to cherish her
memory: her devoted sister, Lenora Williams of Vero Beach, Florida; Goddaughter, Gladys
Benjamin of Rochester, New York; many nieces and nephews, along with over 500 descendants of
the Williams Family, her Antioch Missionary Baptist Church family (Reverend James L. Cherry Jr.)
and a host of friends
Read Less

To send flowers to the family or plant a tree in memory of Mother Frances Roman, please visit our Heartfelt Sympathies Store.

We have provided a digital copy (PDF) of the Memorial Program that we supply at the time of the service. To Download this file please click the filename below.

We encourage you to share your most beloved memories of Mother Frances here, so that the family and other loved ones can always see it. You can upload cherished photographs, or share your favorite stories, and can even comment on those shared by others.

Delores Smith, Deborah Mells, and other have sent flowers to the family of Mother Frances Roman.
Show you care by sending flowers

Posted Jun 03, 2021 at 08:27pm
May God's grace and peace touch our family during this time. Prayerfully , Cousin Delores Smith & Family

Posted Jun 01, 2021 at 12:27pm
"Cousin Frances Roman" was a beautiful woman of God. We will never forget her! Our prayers are with you. Debbie Mells & family (aunt Sarah grands)

Posted May 31, 2021 at 04:40pm
We love you and will miss you Aunt Frances. Love Reatha Williams and family. Please give Josephine Parker this flower basket to remember Aunt Frances. 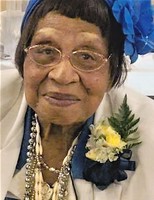