To share your memory on the wall of Herbert Radcliffe, sign in using one of the following options:

Herbert grew up in Rochester, NY and graduated from Monroe High School in 1978. After graduating high school Herbert attended Wilberforce University in Ohio where he met his college sweetheart Kim Juliet Woodland in 1979. After attending college together, they were married in September of 1983, following their wedding they moved to Louisiana where Herbert served in the United States Air Force. Herbert was stationed in Louisiana at the England Air Force Base and served as the Administrator for the Flying Tigers. In 1985 Herbert and Kim welcomed their daughter Dominique Ellen Radcliffe into the world.

After an Honorable Discharge from the Air Force, Herbert returned to live Rochester, NY. Herbert’s work ethic reflected that service and commitment was a top priority to him. Herbert went to work at General Motors where he enjoyed fostering great working relationships until he retired. In 1993 Hebert welcomed his son Desmond Gilbert Radcliffe into the world, with Joretta Lane.

To send flowers to the family or plant a tree in memory of Herbert Radcliffe, please visit our Heartfelt Sympathies Store.

We encourage you to share your most beloved memories of Herbert here, so that the family and other loved ones can always see it. You can upload cherished photographs, or share your favorite stories, and can even comment on those shared by others. 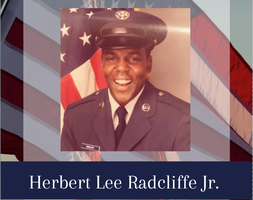