To share your memory on the wall of Weston Gayle, sign in using one of the following options:

A receipt has been emailed to the address provided. A receipt may also be printed.

As a young adult, Weston developed an interest in automotive repair. This interest began his career as a skilled technician at various car dealerships in the Rochester area. When not at work, he would spend his time repairing cars for friends and family. In 1977, Weston began working at General Motors as a machine operator. On October 1, 2002, Weston put on his favorite suit, stepped into General Motors looking cleaner than the board of health and proudly retired after 25 years of dedicated service.

Weston’s spiritual journey led him to Pilgrim Pentecostal Church of God where he fellowshipped for several years. In 2003, he joined his wife, Beverly and became a member of Faith Tabernacle of Prayer under the Leadership of Bishop Paul Parnell. In 2004, he was baptized in the name of the Father, the Son and the Holy Spirit. Occasionally, he would participate in the men’s choir. He enjoyed hearing the songs “I’m Free” and “My Soul is anchored.” Weston often expressed his admiration towards the Pastor Aide Committee.

Weston loved cooking traditional Jamaican/Caribbean dishes and making homemade juices. Some of his favorites included Irish moss, Fish Tea, and Cow foot with Beans. He took pride in preparing and sharing meals with his family and friends. In his free time, he enjoyed watching basketball, tennis, horse racing and playing dominos. Weston enjoyed vacationing in Jamaica and visiting family and friends in Connecticut and Canada. Weston’s Charm, Charisma, Strong sense of fashion, and love for his family will truly be missed.

I have fought the good fight, I have finished the race, I have kept the faith

To send flowers to the family or plant a tree in memory of Weston A. Gayle, please visit our Heartfelt Sympathies Store.

We encourage you to share your most beloved memories of Weston here, so that the family and other loved ones can always see it. You can upload cherished photographs, or share your favorite stories, and can even comment on those shared by others.

Tadal and Graziano Families sent flowers to the family of Weston A. Gayle.
Show you care by sending flowers

Flowers were purchased and a memorial tree planted for the family of Weston Gayle. Send Flowers

Tadal and Graziano Families purchased flowers and planted a memorial tree for the family of Weston Gayle. Send Flowers 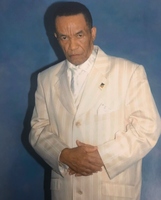