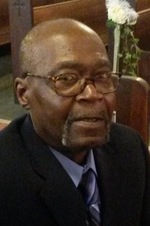 LEESON T. WASHINGTON was born February 24, 1954 in Kingstree, South Carolina to the late Mary Gamble Cameron Washington and Louis Washington. While he was a young child, his family relocated to Rochester, New York. He attended the Rochester City Schools and graduated from Monroe High School with the Class of 1972.

He was employed with the Eastman Kodak Company for a period of one year. In 972, he began working for Rochester Products, retiring after 32 years of employment.
Leeson met his wife, Linda, in elementary school. At the age of 16, the two began dating, and married August 12, 1972. Their union was blessed with one son, Leeson Malcolm Washington. Leeson took Shawn McCutchen, Ana Jones and Monica Jordon as his own children and helped to rear them. He loved all his family and friends, and he was a hero to his grandchildren who dearly love and miss him dearly. He had a big heart! Family and friends could count on him to be there in their times of need.
He enjoyed fishing with Johnny Coley, his fishing partner of 40 years. He also enjoyed cooking the fish he caught. A sports enthusiast, he loved football and basketball. Another of his favorite past times was watching Westerns on television.

He was a long time member of Full Gospel Church under the leadership of Pastor Calentha Henry.
Leeson transitioned from this life on September 17, 2019 at Strong Memorial Hospital in Rochester, New York. He is predeceased by: his parents, Mary Gamble Cameron Washington and Louis Washington and a sister, Diane Thompson. He leaves to cherish his memory: his wife, Linda Washington; sons, Leeson Malcolm Washington and Shawn McCutchen (whom he considered his own son); two daughters, Ana jones and Monica Jordan (whom he considered his own daughters); grandchildren: Ha-Queem, Porsha, Aniya and Jani Washington, Alexis, Markia and Ryan Benjamin; three brothers: Samuel (Rosalind) Washington, Willie (Rita) Washington and Charles (Evelyn) Washington; brothers-in-law: Ray Allen, Cornell (Felicia) Henry, Calentha Henry Jr. and Douglass (Annette) Henry; sister-in-law, Malisha Henry, and a host of nephews, nieces, cousins and friends.

He will be truly missed by all who knew and loved him.

Visitation Thursday, September 26, 2019, from 10 AM - 11 AM with services to follow at Power House Kingdom Cathedral, 48 Clifton St. Interment Maplewood Cemetery.

All rights reserved. This obituary is also archived at obittree.com